PEN All India, IWP, US Consulate at Kitabkhana 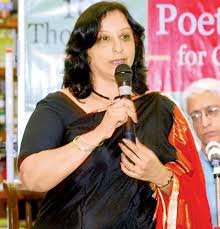 An Evening in Paris!

And to my mind, Paris and Poetry are interchangeable words, proper nouns both, occupying those delicious interstices of the mind where dreams linger.

Iowa-Mumbai-IWP Poets congregated at the book lovers' haven- Kitabkhana, celebrating its fifth anniversary, yet again in a shower of poetry. Brilliance, memories, dreams and verse lit up an evening where old met new, community became one with the individual, and poetry threaded its way into hearts.

Delighted to hear wildlife enthusiast poet Sandra Alcosser's poems (she is the IWP delegate who conducted the poetry workshop at US Consulate on Monday), alongside those of Arvind Mehrotra (IWP alumnus who read The Cobbler, The Iron Woman), and Adil Jussawala's remambrances of IWP alumnus poet Dilip Chitre... oh, that such verse could go on forever!

Ranjit Hoskote, (an IWP alumnus) read his poems about old maps and seas, Anjali Purohit combined strength and humour in her lines, Mustansir Dalvi spoke about lost spaces, lost voices of the marginalised....

Birthday girl Menka Shivdasani stole the show with her 'find her in the mirror and throw her..' ; after startling all with her 'boil her softly, stew her, crush her...' poem.

And of course, this evening is extra special because , after long, two of my favourite poets - Rochelle Potkar and Jennifer Robertson read together. It seems like old times...

Literally a roaring evening, where i exchanged greetings with Tiger Man Bittu Sehgal !